Gibbs and Donnan showed that the distribution of permeable ions, allowing for valance, will equal on another as in this equation.

There is a greater osmolality in the compartment containing impermeable ion. In the body this is the intracellular and vascular compartments. If it weren't for the continual osmogenic work of Na/K ATPase cells would burst under the inward osmosis of water from the interstitial space. The oncotic pressure of Starlings forces arises from the Gibbs-Donnan effect.

Extensive mathematical description of the Gibbs-Donnan effect at the whole body level.

This simulator requires the latest version of Adobe Flash and Javascript running.

This Flash/ actionscript simulator models individual particles in solution. Each particle is given a random position and velocity. The impermeable protein particles are distributed on the 'IN' side of the membrane representing intracellular protein. The velocity of each particle is continually affected by repulsion/ attraction to the other particles in the model according to Coulombs Law. Strong and nuclear forces are ignored. 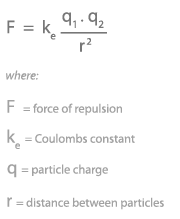 Permeability in the model is absolute. Potasium and chloride ions are fully permeable in the model. Protein is completely impermeable. Relative permeability is not important for demonstrating the Gibbs-Donnan effect in a model that lacks active ion transport. Whilst the relative ion permeabilities will affect the rate at which equilibrium is reached they will not affect the equilibrium state.

In the model, potassium particle carries a charge of +1 whilst chloride and protein particles carry charge of -1 each.

Sodium ions have been left out of this simulation because in the body, the extruding effect of Na/K ATPase combined with the relative impermeability of the cell membrane generates a completely reversed sodium concentration gradient than would be predicted from this simulator.

Relative ion abundances may be changed to see their impact. Removing all the protein removes the Gibbs-Donnan effect completely.

If you have any suggestions please get in touch.